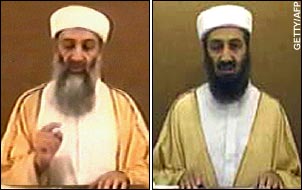 Osama Bin Laden has been hanging out with Michael Jackson. Michael has been teaching him how to keep that tight skin and youthful look.

Seriously, have you seen Osama's new look? He has a different nose, basically no moustache, an all black beard that is clean and thick instead of gray and thin. Not sure why his right eye looks like he got punched but maybe he is recovering from an eye job or someone just happened to capture the picture when that eye was closed.

Even the hair on his head is darker. As you age, usually your hair recedes away from your face. Not Osama's, his is growing the opposite direction. His hair is closer to his face then what it use to be. He had to find the fountain of youth.

The new Osama is also much smaller. He just doesn't look as thick as he use to and his shoulders are not as wide. I wonder what he is doing that is making him shrink like that. His health must be worse then what people thought.

I know he has had severe kidney problems for the last 6 years and has miracously lived in the mountains with ease all this time. Not sure if that could change the structure of his body or not, but it seems like anything is possible these days.

You be the judge of this new picture of Osama.

I know a question that will come up when wondering if this can be him, "Why would someone put up a fake Osama Bin Laden"? To answer this, you have to watch Wag the Dog.That will answer your questions completely. Return to articles from Osama Bin Laden Makeover