Bush Wants You Out of Your House

Bush wants you out of your house. He is a key role in helping to cut the middle class. This will mean that there is only the poor and the rich. Bush sent James Lockhart to shut down Fannie Mae. Fannie Mae was put in place to help the Middle Class.

Keep an eye on programs that help to keep the Middle Class in existence. I guarantee that you will see them disappear.

I transcribed a video by Jim Cramer. He says an estimated 7 million people will lose their homes. The US population is 301.1 Million (301,139,947). Once you read this, you will see why Bush wants you out of your house.

Cramer: Federal Housing Enterprise Official Is Up to No Good

I transcribed this from a video from Street.com TV. (video no longer available)

Hi Jim. I am going to through two names at you. Tell me what comes to mind. James Lockhart

James Lockhart is a very nice man, a good man. He has been put in a place called OFHEO or Regulator of Fannie Mae. He was put in because Fannie Mae had problems but also because it is largely an institution set up by Democrats. To make it so that if we have a sieze up in the mortgage market and people are losing their homes, Fannie Mae can come in and help people who are buying homes of the $250,000 and less variety. 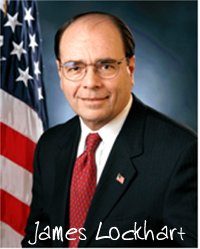 Kind of helping the working man. Trying to never have after the 30's another forgotten man era. Try to stop the forgotten mane before he is forgotten. So james Lockhart has come in and he is trying to do the right thing, he is trying to make Fannie Mae clean. But the other thing is that his agenda has always been the same which is to make so Fannie Mae is hamstrung and can't do its job. Because he has always felt the private industry can do a better job at lending.

One of the things that has happened in the last 3 months is that the private industry has basicly withdrawn from lending. You noticed that Wells Fargo wont do these loans anymore and a lot of these banks have walked away. So all the mortgage brokers that we relied on has dried up other than Countrywide.

So what Lockhart has done with his insistance of putting a strangle hold, choke hold on Fannie Mae. Is that he has become the one person in America who is going to end up responsible for 7 million people that I believe that would fit in Fannie Mae loan help who has lost their home.

There is a beauracrat, he does have a name, he does have a face, his name is James Lockhart. He is a buddy of President Bush's. His goal is to evict you from your house. Now he doesn't know that is his goal.

His goal is to stop Fannie Mae. When you stop Fannie Mae, you create that era before Fannie Mae was created by FDR in order to make it so you don't lose your home. So James Lockhart, if he were to go on a vacation, maybe a permanent vacation (resign), he would no longer be the enemey of every homeowner who's in trouble in the United States right now.

Jim Cramer:
He ain't watching. He's busy putting a chokehold on Fannie. If he has to go take his eye off the chokehold off of Fannie, some people wont be able to stay in their houses. He has a mission for heaven's sake and I applaud it. He has been giving a mission by President Bush and he intends to deliver. By the way, President Bush and all his other guys that come on TV all the time, why wont they let me sit down with them? Is there a reason? Oh, cause Cramer is an irresponsible guy? No, actually because I know what is going on.


Also read Most Hated Man in the U.S., or Savior of Homes

return to Articles from Bush wants you out of your house